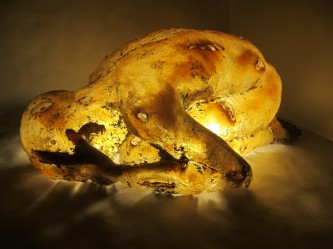 Dylan Guest of Baltimore County, Maryland, who hails from Maryland Institute College of Art and is a graduate of the George Washington Carver Center for Arts and Technology, is a National YoungArts Foundation Finalist in Visual Arts.

Chosen from approximately 10,000 applications from students in nine disciplines in the visual, literary and performing arts, he will participate in a life-changing experience provided by the National YoungArts Foundation.

This year, during the 32nd annual YoungArts Week in Miami, Florida from January 6 to 12, 2013, Dylan will join 151 other Finalists in a week of intense master classes with internationally renowned artists such as Adrian Grenier (1994 Alumnus in Theater), Marisa Tomei, Bobby McFerrin, Andrew Rannells (1997 Alumnus in Theater), and Bill T. Jones (YoungArts Artistic Advisor). Students will also have the opportunity to share their work each evening through performances, readings, exhibitions and screenings that are free and open to the public. YoungArts Week will culminate in An Affair of the Arts Performance and Gala on January 12, 2013. YoungArts Week performances will be livestreamed on youngarts.org.

“This year’s extremely talented students represent a diverse group whom we consider to be the most promising young artists in America today,” said Paul T. Lehr, YoungArt’s Executive Director. “The quality of this year’s winners is a testament to the strength of our expanding program.”

The Finalists selected to participate in YoungArts Week were chosen through a blind adjudication process from a pool of applicants representing all 50 states and the District of Columbia, as well as all U.S. territories, and are among the 685 YoungArts Winners for 2013 who also represent awardees in Honorable Mention and Merit categories. During YoungArts Week the adjudication process will continue to determine further award levels. Monetary awards ranging from $1,000 to $10,000 will be presented to students exhibiting excellence in their discipline. Additionally, Winners living in Los Angeles, Miami, and New York are invited to participate in YoungArts’ regional programs – YoungArts Los Angeles (February 2013), YoungArts Miami (April 2013), YoungArts New York (May 2013).

YoungArts is the only organization in the nation to recognize students in nine discipline categories of cinematic arts, dance, jazz, music, photography, theater, visual arts, voice, and writing. Beginning in 2013, a tenth discipline, architecture and design will be inaugurated as the latest addition to these categories.

Regional and National Expansion
In October 2012, YoungArts announced a wide-ranging expansion of its programs, intended to increase the organization’s service to emerging artists and deepen its ties to Miami, New York and Los Angeles. To assist with the growth and development of its new initiatives, YoungArts has appointed Frank Gehry, Plácido Domingo, and Bill T. Jones as Artistic Advisors. They join a stellar network of YoungArts Master Teachers and mentors, including Michael Tilson Thomas, Edward Albee, John Guare, Robert Redford, Julian Schnabel, Liv Ullmann and Bruce Weber.

About the National YoungArts Foundation The National YoungArts Foundation (formerly known as the National Foundation for Advancement in the Arts) was established in 1981 by Lin and Ted Arison to identify and support the next generation of artists, and to contribute to the cultural vitality of the nation by investing in the artistic development of talented young artists in the visual, literary, and performing arts. YoungArts provides emerging artists with life-changing experiences with renowned mentors, access to significant scholarships, national recognition, and other opportunities throughout their careers to help ensure that the nation’s most outstanding emerging artists are encouraged to pursue careers in the arts.
To date, YoungArts has honored more than 16,000 young artists with over $6 million in monetary awards; facilitated in excess of $100 million in college scholarship opportunities; and enabled its participants to work with master teachers who are among the most distinguished artists in the world, such as Mikhail Baryshnikov, Jacques d’Amboise, Plácido Domingo, Bill T. Jones, Quincy Jones and Martin Scorsese. In addition, at the request of the Commission on Presidential Scholars, which is appointed by the President of the United States, YoungArts serves as the exclusive nominating agency for the U.S. Presidential Scholars in the Arts, the country’s highest honor for artistically talented high school seniors.

In early October 2012, YoungArts acquired the historic Bacardi buildings in Miami and began converting the organization’s first national headquarters into a campus that will become a thriving arts and cultural center for young artists ages 15 and up, allowing YoungArts to carry forward an expansion of activities unprecedented in its history. World-renowned architect Frank Gehry has been commissioned to design the master plan for the historic Bacardi campus, creating a multi-disciplinary arts complex that will include a park with state-of-the-art video projection capabilities and arts programming for the benefit of the community. In order to help with its expansion, YoungArts has named Frank Gehry, Plácido Domingo and Bill T. Jones as Artistic Advisors. As part of this initiative, the organization will produce events year-round in New York City, including performances programmed by Mikhail Baryshnikov, master classes and screenings at The Museum of Modern Art, and performances at The Metropolitan Museum of Art. In Los Angeles, YoungArts will inaugurate a new program, providing young artists with master classes, workshops, performances and exhibitions. The new YoungArts campus will host year-round programming in Miami, including master classes and forums, interdisciplinary performances and exhibitions, screenings of the Emmy-nominated HBO YoungArts MasterClass series, and an art gallery offering exhibitions with free admission, curated in partnership with Miami Art Museum, among others.
YoungArts alumni who have gone on to become leading professionals in their fields include actresses Vanessa Williams, Viola Davis, and Kerry Washington; four-time Tony Award nominee Raúl Esparza; Executive Director of American Ballet Theatre Rachel Moore; recording artists Nicki Minaj and Chris Young; musicians Terence Blanchard, Eric Owens, and Jennifer Koh; choreographer Desmond Richardson; and internationally acclaimed multimedia artist Doug Aitken.
Media Note: For more information about YoungArts, visit   www.youngarts.org. For a complete list of 2013 YoungArts Winners please visit  http://www.youngarts.org/sites/default/files/2013YoungArtsWinners.pdf